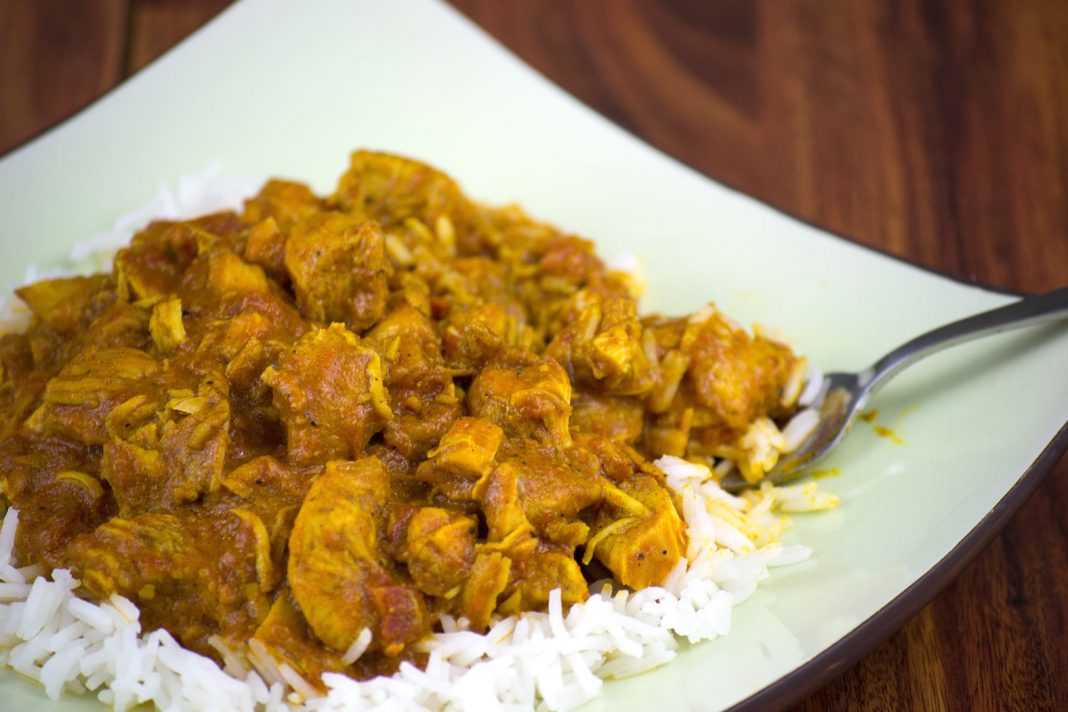 I’ve been thinking a lot about Indian cuisine lately. It’s delicious, it’s flavorful, it’s colorful, and it contains some of the healthiest ingredients on the planet.

Take turmeric for example. It’s a common spice in Indian cuisine and has long been known to have anti-inflammatory properties. Also, Jonny Bowden, in his book Most Effective Natural Cures on Earth: The Surprising Unbiased Truth about What Treatments Work and Why, has also suggested that turmeric has “anticancer activity, it helps support liver health and it’s a powerful antioxidant”. Not too shabby.

Another favorite of Indian cuisine is coconut milk. Used in both meat and vegetable dishes, it not only makes Indian cuisine more accessible to the dairy free among us, but also adds a powerful nutritious punch to any dish. The main fatty acid in both coconut milk and coconut oil is lauric acid, which is said to have both anti-microbial and anti-viral properties, is used in traditional Indonesian medicine for wound healing and shows some promise in treating acne. Also, check out the presentation given by Mary Enig, PhD at the Lauric Oils Symposium, which described the anti-cancer, anti-heart disease and anti-viral properties of coconut oil.

Ginger and garlic are two more ingredients found in many Indian dishes. Actually, many of the recipes I’ve tried call for Ginger-Garlic Paste. Ginger has long been recommended as a treatment for nausea, particularly for morning sickness, it also shows anti-cancer properties and shows promise against H. Pylori. Garlic also shows anti-cancer activity, and because of its anti-microbial activity, some people even use it to treat ear infections.

And if you are looking for help with your digestion, take a look at this abstract. When they investigated the “digestive stimulant action of three Indian spice mixes” that included turmeric, coriander, red chili, black pepper, cumin, ginger and onion, they found:

these spice mixes brought about a pronounced stimulation of bile flow and of bile acid secretion. Among the three spice mixes examined, spice mix III which is customized so as to include spices that are desirable from the point of view of stimulation of digestion, had the highest stimulatory influence particularly on bile secretion, bile acid output and the activities of pancreatic enzymes. While activities of pancreatic lipase, amylase and chymotrypsin were elevated by 40, 16 and 77%, respectively, the bile volume as well as the bile acid secretion were almost doubled in spice mix III treatment. The higher secretion of bile especially with an elevated level of bile acids and a beneficial stimulation of pancreatic digestive enzymes, particularly of lipase could probably be the two mechanisms by which these combinations of spices aid in digestion.

But wait, here’s where is gets really interesting. A study was done on the use of common Indian spices and levels of cancer. Here’s their abstract:

Bioactive components of many foods added during cooking have potential antioxidant, anti-inflammatory, antimicrobial, antibacterial and chemopreventive properties. However, epidemiologic studies generally do not collect detailed information on these items which include spices, chilies, coconuts, garlic, onions, and oils. Since India has some of the highest spice consumption in the world, we developed a computer-based food preparer questionnaire to estimate per capita consumption of 19 spices, chilies, coconuts, garlic, onions, and 13 cooking oils among 3,625 participants in the India Health Study, a multicenter pilot study in three regions of India. We observed notable regional differences in consumption of spices, chilies, coconut, garlic, and onions. In Trivandrum, over 95 percent of the participants consumed 12 different spices, while in New Delhi and Mumbai, 95 percent of participants consumed only four and five spices, respectively. Cooking oil use also varied, as ghee was most common in New Delhi (96.8%) followed by mustard seed oil (78.0%), while in Trivandrum the primary oil was coconut (88.5%) and in Mumbai it was peanut (68.5%). There was some variation in consumption by education, income, and religion. Using a novel method for assessing food items primarily added during cooking, we successfully estimated per capita consumption within an epidemiologic study. Based on basic science research and suggestive ecologic level data on cancer incidence and spice consumption, improving epidemiologic assessment of these potentially chemopreventive food items may enhance our understanding of diet and cancer risk.

Now, from the results section of this study, look at this graph. And look where India is compared to the other countries. Wow.

So, in the spirit of letting my food be my medicine, and my medicine be my food (thank you Hippocrates), here is a recipe for Coconut Curry. I started with this recipe, and modified it to suit my sugar free, paleo-inspired self. Here’s how I did it:

2 lbs meat, cut into cubes – I’ve tried this with both chicken and lamb (not together). Both were delicious.
2 tblsp coconut oil
2 tblsp curry powder
1/2 onion chopped
2 cloves garlic, crushed and chopped
1 14oz can coconut milk
1 14oz can of diced tomatoes
1 8oz can of tomato sauce
3 tblsp sugar equivalent (optional). I’ve made it without and it’s delicious, but if you would like to add some sweet, try 1/2-1 tsp powdered stevia or 3 tblsp honey.
Salt and pepper

Step 1: Melt coconut oil in the bottom of a large pot. (Use a larger pot than you’d link because the sauce will splash. When I doubled the recipe, I used my stock pot.) Once melted, add the onion and garlic and cook over medium heat for a few minutes until onion is translucent. 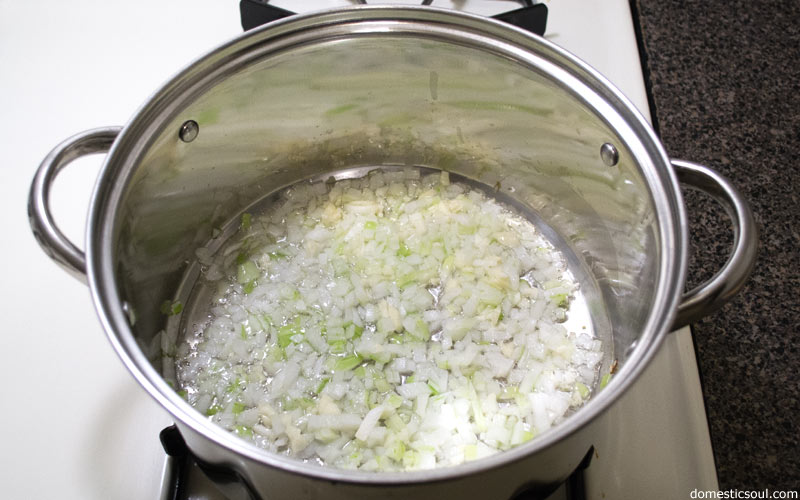 Step 2: Add curry power and mix well making sure the mix isn’t too try. If it is, add a bit more oil. Cook for about a minute, mixing to distribute curry powder evenly. 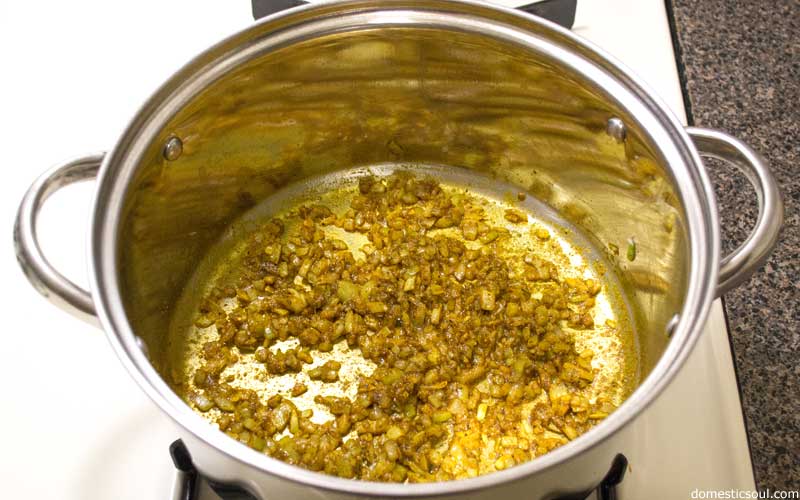 Step 3: Add meat of choice and cook covered until meat is thoroughly cooked, stirring every so often to make sure nothing is getting stuck to the bottom of the pot. 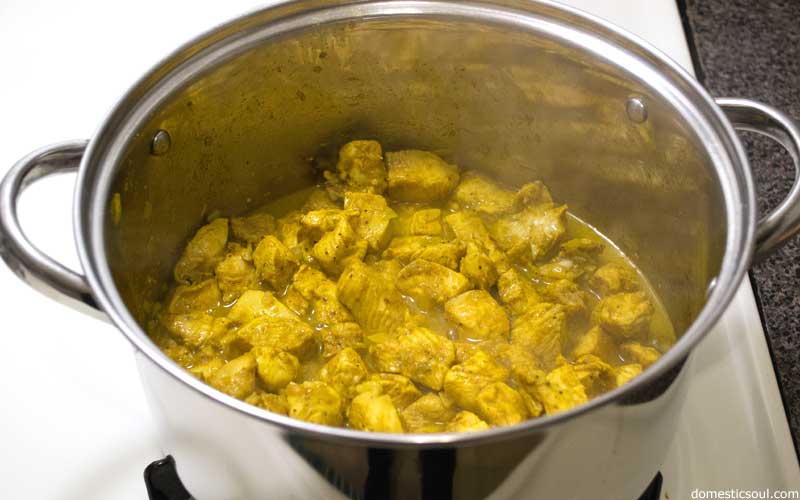 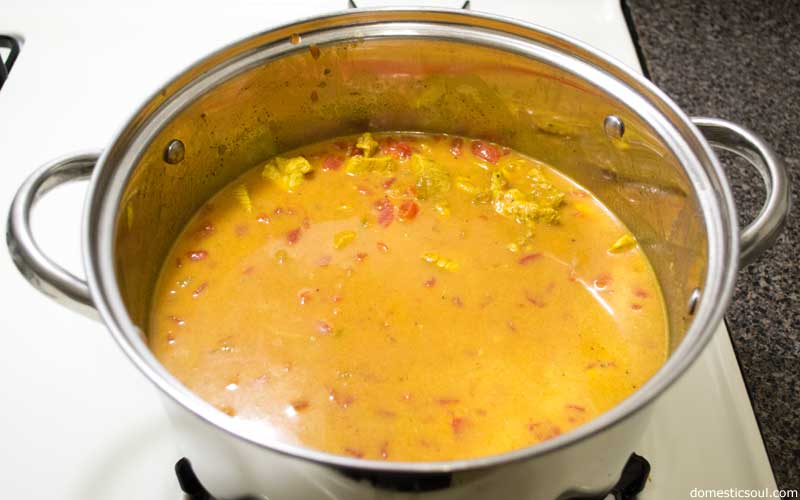 Step 5: Cook over medium heat (with lid askew to vent) for approximately 40 minutes, checking occasionally to make sure nothing is stuck to the bottom. 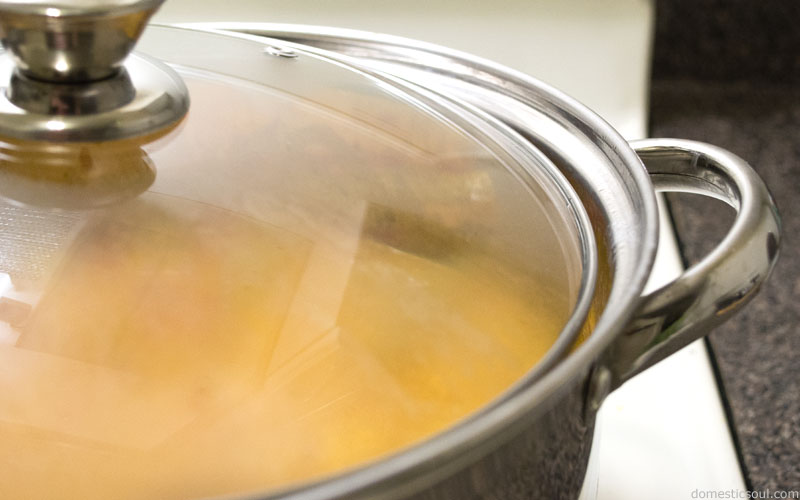 Step 6: After 40 minutes, uncover and cook for a few more minutes to cook off some of the extra liquid and thicken the sauce. (The time will vary based on your stove and desired thickness of the sauce.) Once sauce has thickened, serve over mixed vegetables or lacto-fermented rice. 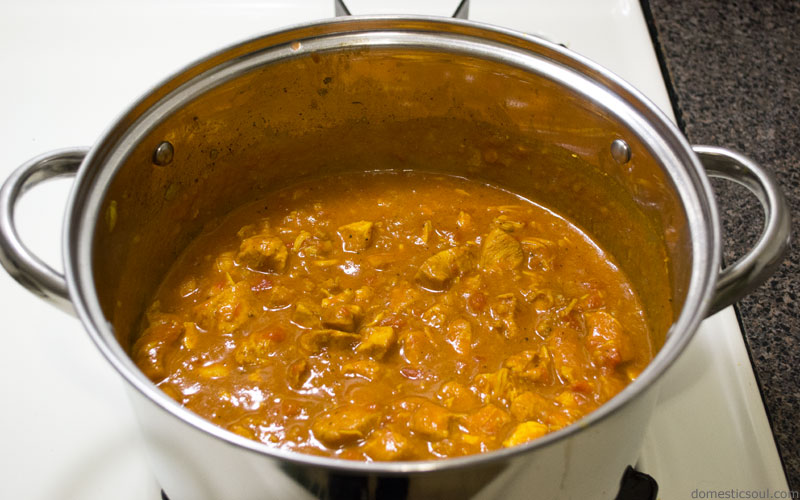 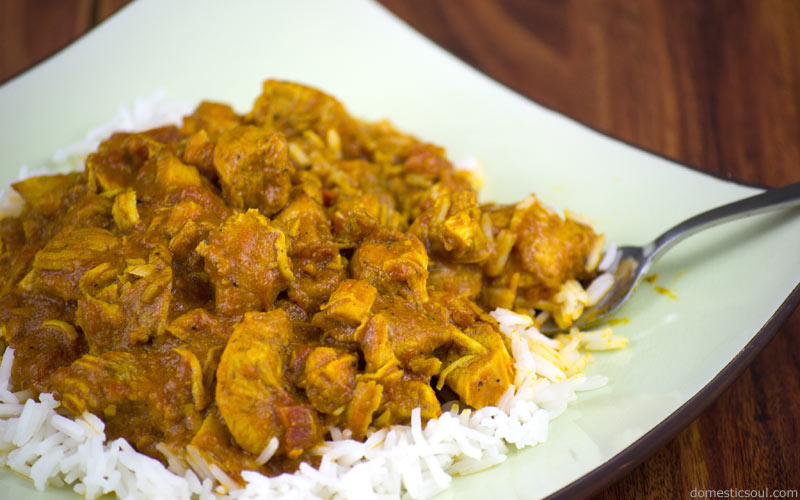