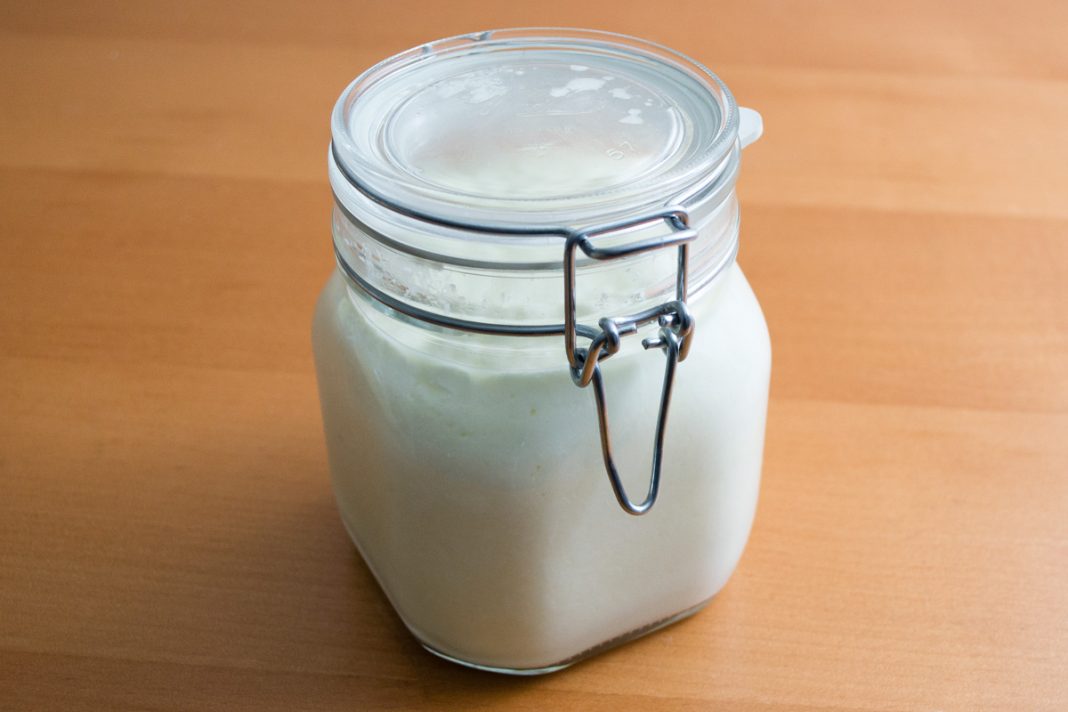 I was reading about 24 hour yogurt in Breaking the Vicious Cycle (a diet recommended for those with intestinal issues) as a way to get a hefty dose of probiotics without all the lactose that conventional yogurts contain. As someone who has suffered with intestinal health issues, I was extremely curious.

But before I invested in a yogurt maker (which I have since), I wanted to do a test run of 24 hour yogurt. Did the yogurt even help my stomach at all? Also, I didn’t want to use pasteurized, homogenized milk like you find in the store. I was living in a state where raw milk was practically everywhere and I had been reading about its health benefits, so I was eager to combine the two. This, of course, meant modifying traditional yogurt recipes, as heating raw milk to 180°F/82°C would effectively pasteurize it and defeat the purpose of using raw milk in the first place.

Raw milk yogurt is not a new phenomenon, and I surely didn’t invent it. Sally Fallon has included a recipe for it in her book Nourishing Traditions (which is amazing, and I highly suggest picking up a copy. But, I had a bit of trouble with her recipe because it requires a double boiler, a glass jar and a dehydrator. I don’t have a double boiler, though I’m sure I could fake one. And, because of it’s shape, my dehydrator won’t work in the way she recommends. But, since I had made yogurt in a crockpot before (though not raw milk yogurt), I just did a little research, combined a bunch of ideas and came up with the following crockpot raw milk yogurt tutorial.

(Also, I was going to type up a long post about the benefits of raw milk, but I figure you are more interested in the recipe than my babbling. Instead, I suggest you check out RealMilk.com and read through their articles. That should cover almost any question you could think of about raw milk, including where to find it locally.)

I also have a tutorial for how to make thick raw milk yogurt in a yogurt maker.
See that tutorial here. 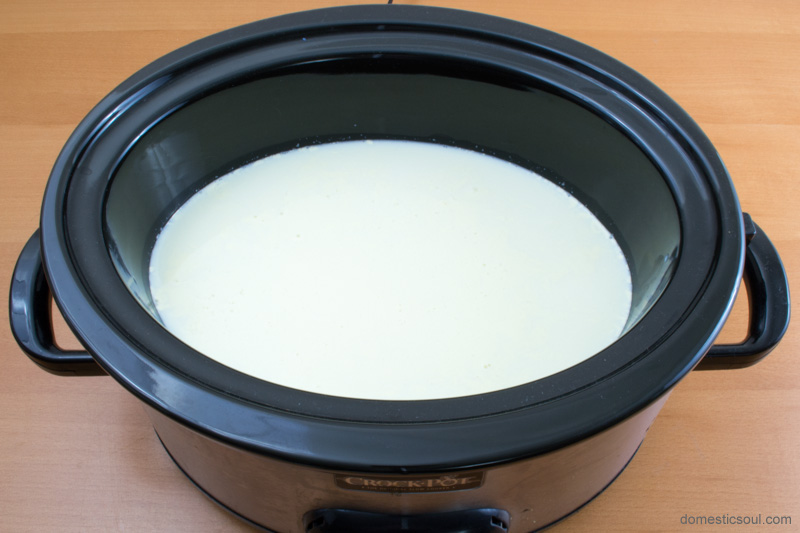 Clean your crockpot stoneware and lid. Like, really clean it. I’d even sterilize it in the dishwasher if you have one – with an extra rinse cycle containing vinegar. (Make sure your stoneware is dishwasher safe. I just took the chance with mine. I have backup stoneware in case I break one.)

You want your stoneware to be the cleanest item in your house. The goal here is to make sure that there is no possible way you have any unfriendly bacteria in your crockpot that could possibly contaminate your yogurt.

Once your crockpot is clean and lead free, pour in a half gallon of raw milk. I prefer Guernsey milk, but I’ve also used Jersey milk with tasty results. 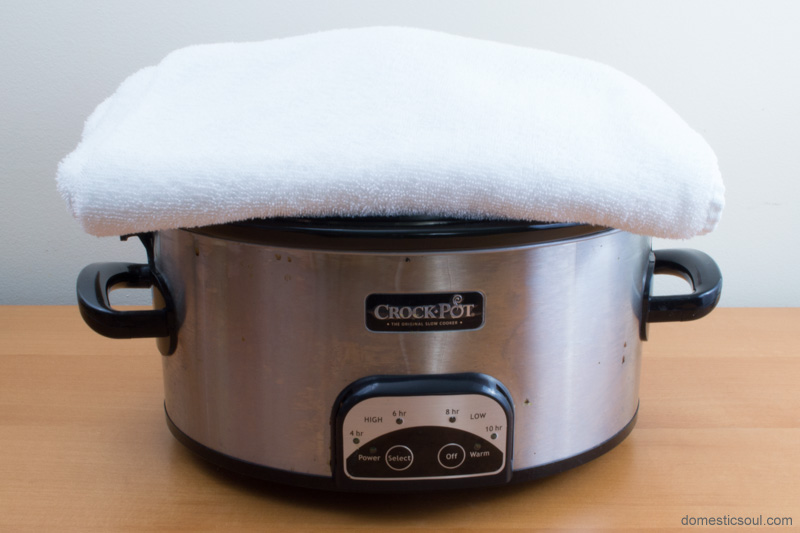 Set crockpot to low. Cover crockpot with the glass lid that comes with the crockpot. Then, on top of the lid, place a clean, folded bath towel for insulation. 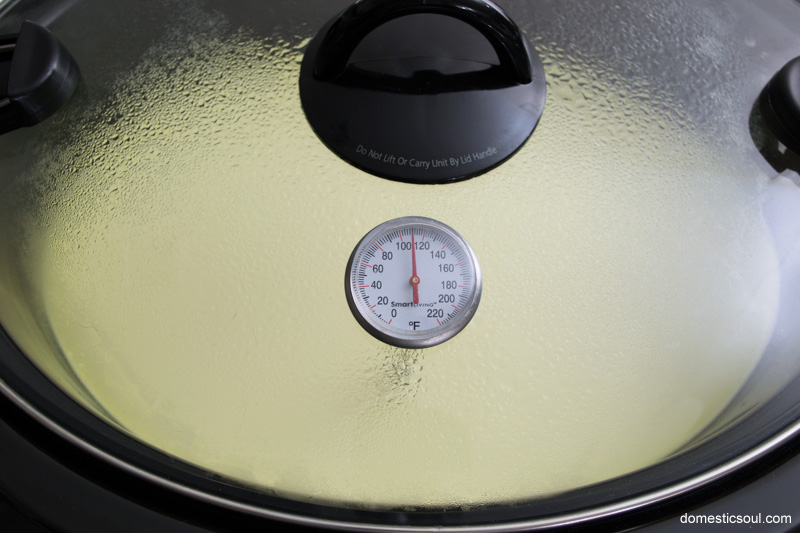 With a candy thermometer, check the temperature of your milk. You want to hit about 110 degrees, but no higher. Any higher will kill off all the good stuff in your raw milk and effectively pasteurize it. I believe it took my crockpot approximately 20-30 minutes to reach this temperature, but don’t go by my crockpot time as all of them will heat differently. Make sure when you are testing the milk temperature you have the thermometer in the milk only and not touching the bottom of the pot.

At this point your milk is culturing. Because the crockpot is turned off, the temperature will drop over time. My goal is to keep my yogurt between 95 and 100 degrees. Check your milk temperature every few hours with your candy thermometer, and if it has dropped below 95, turn the crockpot back on using the “warm” setting to gently raise the temperature back to the proper range. 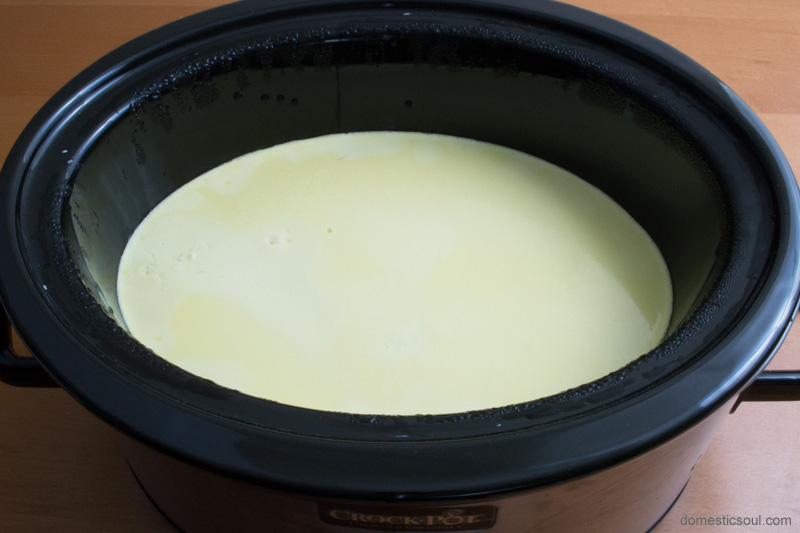 After about 24 hours, your milk should look like yogurt. It will have a little more liquid than commercial yogurt, as commercial yogurt has all sorts of additives to give it the texture we are all used to. If you would like to make it a little thicker, strain it using these instructions and save that whey for future batches. Or, you can eat it as is.

Note: If you notice a yellow layer on top of your yogurt, fear not! 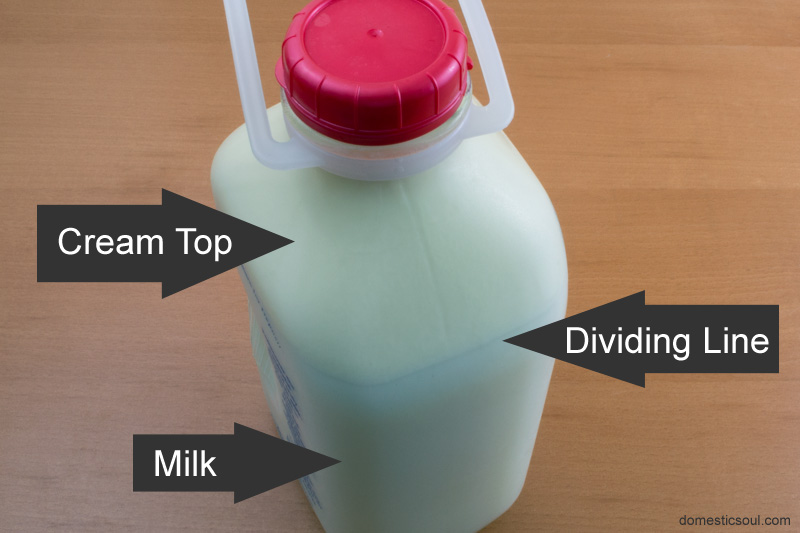 Raw milk is non-homogenized aka “cream top” milk. This means that whenever the milk sits for a while (be it in your refrigerator or a crockpot) the cream will rise to the top, as shown in the photo above. So the yellow layer on top of your yogurt is just the cream rising to the top during fermentation and is nothing to worry about. 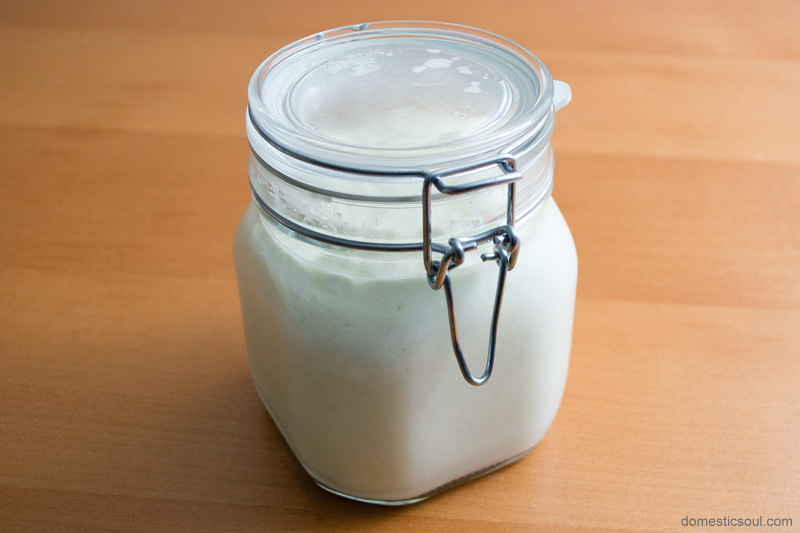 Jar up your yogurt and store it in the refrigerator. Then, just eat and enjoy!

Disclaimer: Generally, raw milk is not recommended for people without robust immune systems because it is not pasteurized. The warning on my current jug of raw milk reads “Warning: This product has not been pasteurized and may contain harmful bacteria. Pregnant women, children, the elderly and persons with lowered resistance to disease have the highest risk of harm from the use of this product.” So, you need to decide for yourself whether or not raw milk is a good food to include in your diet. I have only decided raw milk is a good food to include in my diet. Any risk you may encounter from trying out this recipe is yours and yours alone. I don’t know if you are buying your milk from a reputable source, if you have sufficiently sterilized your tools/crockpot or if you did something else to introduce bad bacteria into your yogurt. So, use this recipe at your own risk, but please… do your research and be careful!