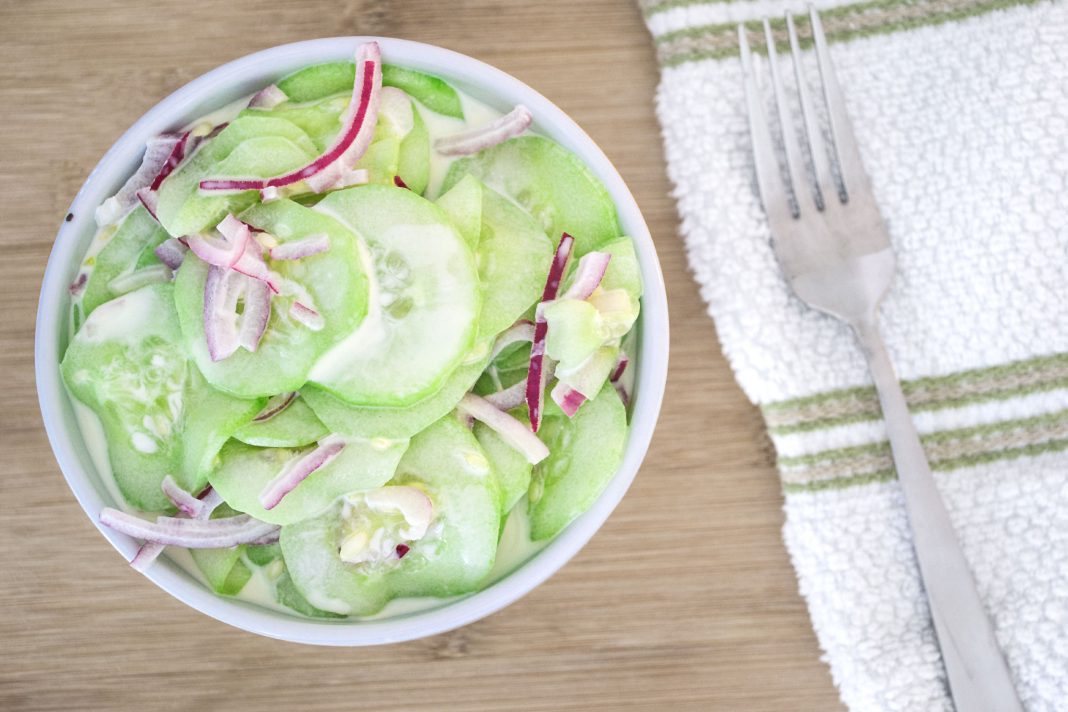 There’s nothing like cucumbers fresh from the garden – crisp, and so versatile. You can throw a few slices in a pitcher of water for a refreshing drink. You can slice them up and make Pastrami & Cucumber Sandwiches. You can make your own pickles. You can make a wide array of side dishes perfect for a picnic. And, of course, they’re well known as a topical treatment for eye puffiness.

In other good news, it’s that time of year when the cucumbers should be going gangbusters, so this is the perfect time to stock up at your local farmers market. I picked some up from my neighbor’s farmstand that were amazingly juicy and crisp. I have to go back today and see if they have any more so I can make pickles. Seriously, there’s just no better food than local food. It’s just a world away from what’s sold in stores. So, let’s get this recipe going while cucumbers are plump, fresh and in season!

Step 1: Slice cucumbers thinly and put them in a large mixing bowl. (Peeling them is optional.) 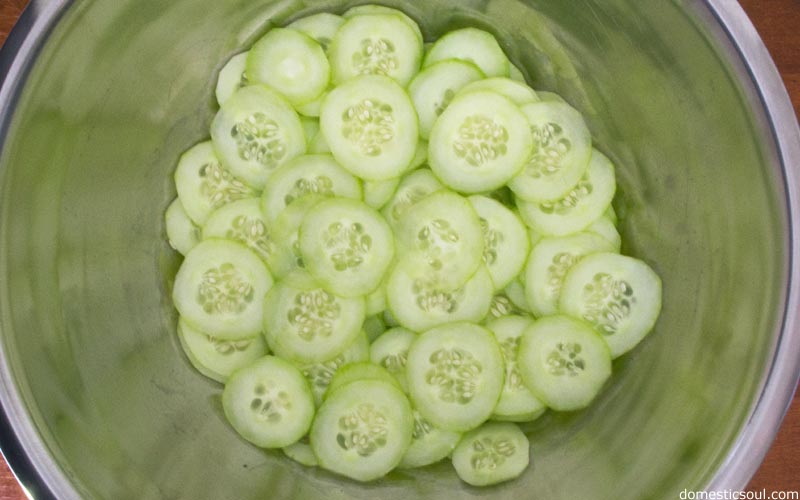 Step 2: Thinly slice the red onion and add it to the bowl. 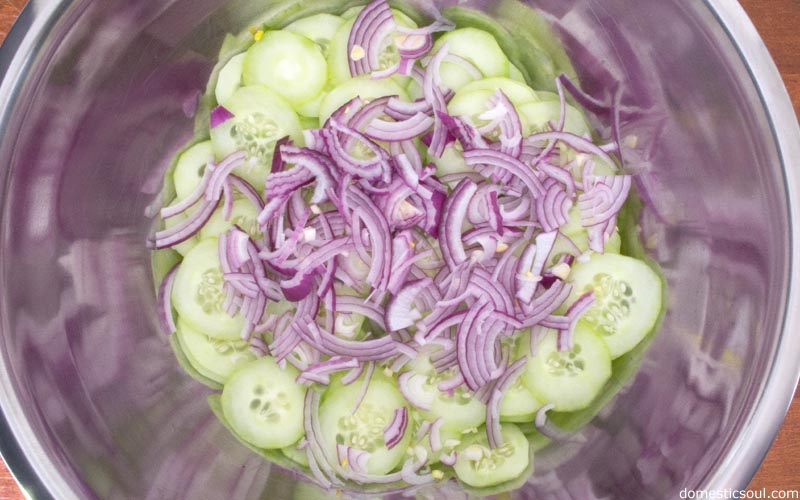 Step 3: Add a generous pinch of salt and mix well. I used coarse Celtic Sea Salt. Let sit at room temperature for a few hours – at least 3, but it doesn’t have to be exact. I’ve left it up to 24 hours before when I’ve gotten busy and distracted. It came out just fine. Basically, you’re looking to wilt the cucumbers and pull some of the liquid out of them. 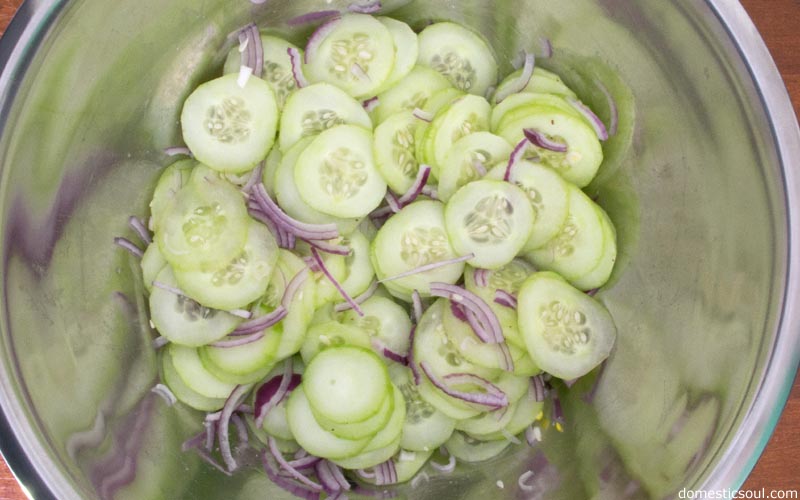 Step 4: After a few hours, there should be a pool of liquid at the bottom of the bowl. The amount of liquid will depend on the cucumbers and will vary from batch to batch. This is totally fine. Leave the liquid in the bowl, you will need it for the next step. Photo below shown with bowl tipped so you can see the liquid. 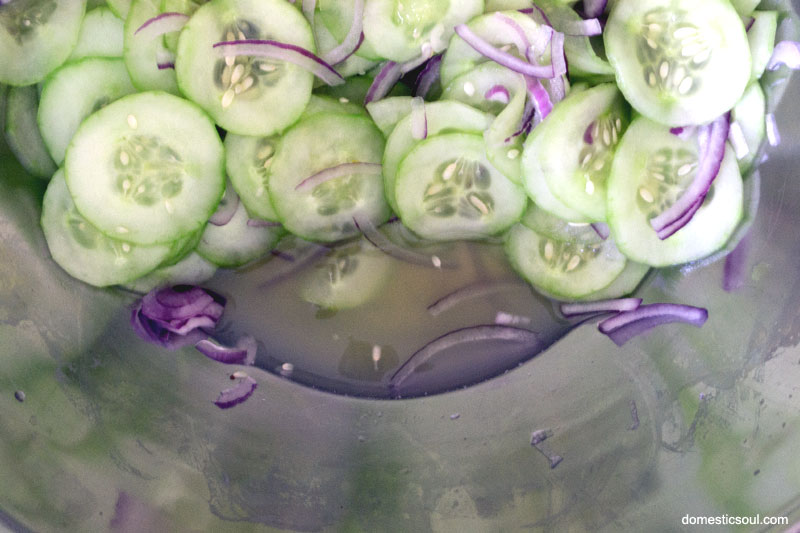 Step 5: Add mayonnaise and apple cider vinegar. Mix well. The mayo, vinegar and cucumber liquid will combine together to form a thin sauce. 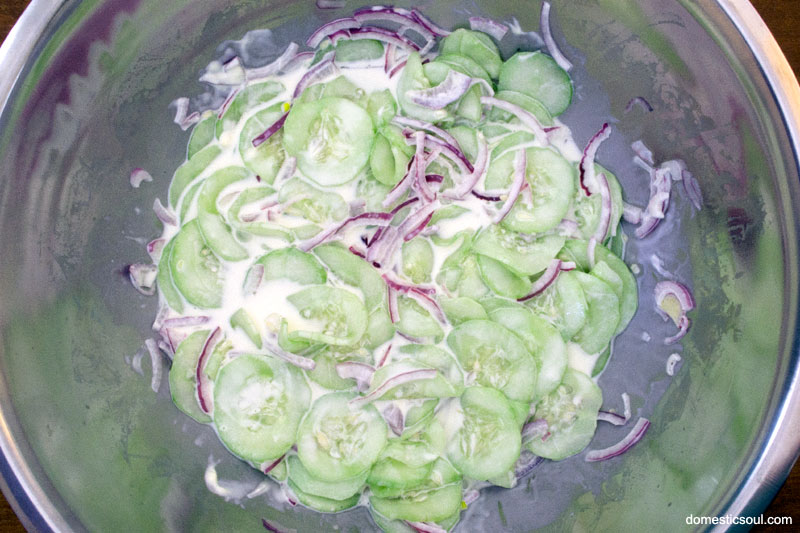 Step 6: Leave in the refrigerator for a few hours up to (and preferably) overnight. I usually put it in a container with a lid and then whenever I go into the refrigerator during the day, I give it a good shake. This is totally optional, but I like to make sure everything is coated while it’s marinating. Once it’s had time to sit for a few hours, serve and enjoy! 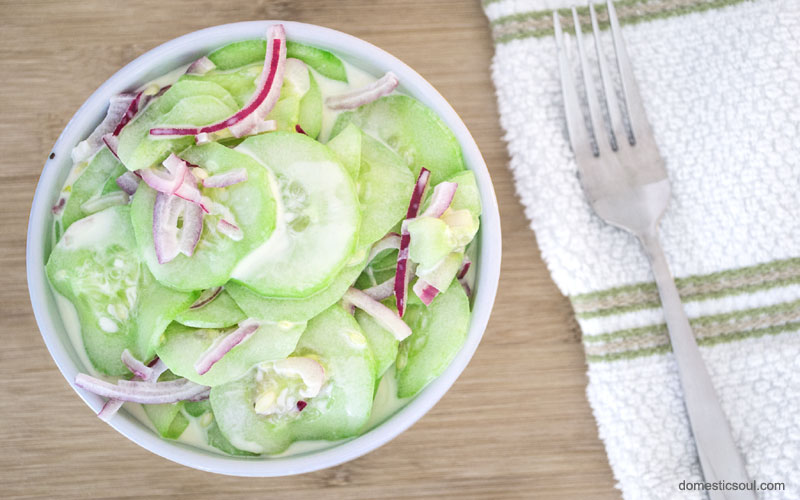