Home Cooking How To Render Lard in a Crock Pot 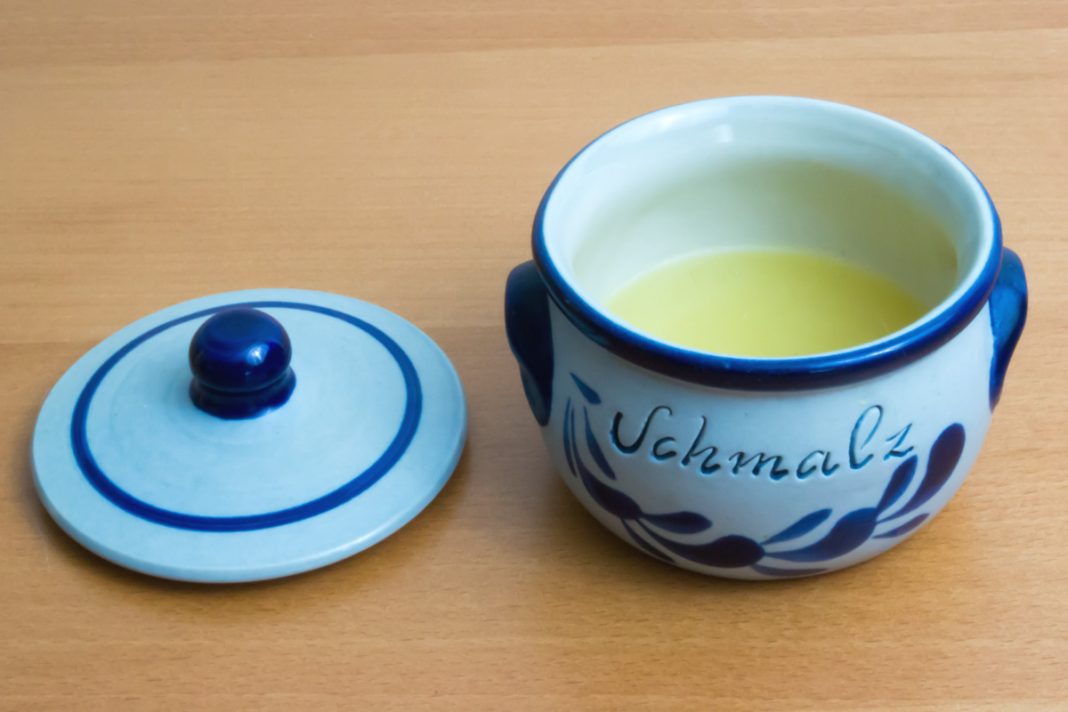 Real lard has to be one of the tastiest ingredients to cook with. It adds a lovely flavor to braising greens, does a wonderful job of pan searing steaks and makes veggie omelets just that much tastier.

But finding real, actual lard is nearly impossible. Lately, the only lard I can find on the shelves is full of partially hydrogenated vegetable oil trans-fats, and even people who swear by vegetable oils think that’s a no-go. Real food loving me isn’t going to get within a football field of that stuff. So how do we make our own?

How to Render Lard in a Crockpot Photo Tutorial

Honestly, sometimes animal fat is just hard to find. They trim the heck out of any half-decent cut of meat at pretty much any store you can find. But therein lies your ace in the hole – talk to your meat cutter. Ask your butcher to save fat scraps for you. It’s usually about a 50/50 shot on whether or not they will do it, but darn it sure doesn’t hurt to try. Even if they do save it for you, you’ll still get asked some very strange questions before they will let you walk out of the store with it. Some of my favorites so far have been:

Butcher: What are you going to do with that? Make candles or soap?
Me: Uhm, eat it?
Butcher: People do that?!

Heh, it’s been interesting for sure. If you don’t feel like dealing with the wide-eyed stares, try going to your local farmer’s market. Find yourself a pig farmer. Ask for leaf lard. They’ll sell it to you – usually at a bargain price – and they understand why you want it. No glazed over look included. Win-win.

If all else fails, I’ve noticed that some Safeway stores are starting to sell packages labeled “pork fat”. It’s a gamble really. It’s obviously not pastured pork, and most of the packages tend to be more meat than fat anyway, but if you lack other options, it’s there. I’d still take this over hydrogenated oils any day.

Step 2: Dig Out Your Crock Pot 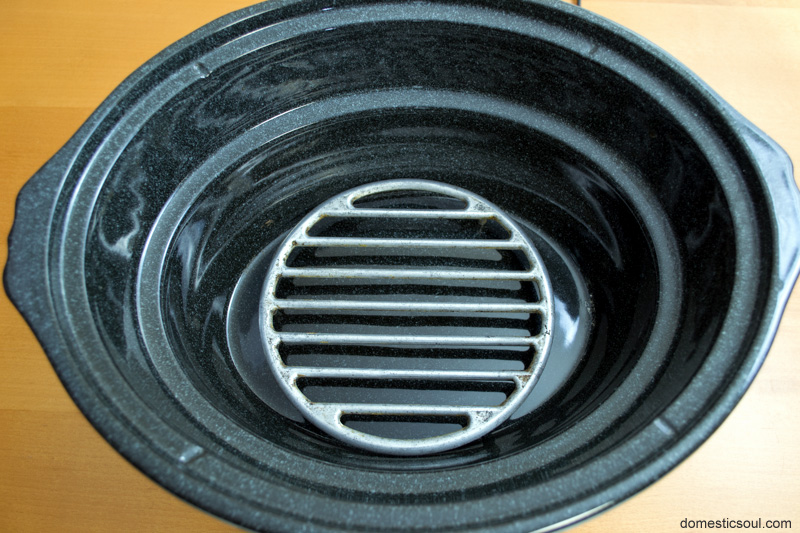 I have a roasting rack for my crock pot. If you don’t have one, this Harold Imports 10-by-6-Inch Roasting Rack would fit in my crock pot. Measure the inside and make sure you buy the right size. If you don’t have a roasting rack, you can render by lining the fat pieces along the sides of the crock pot, but as they render, they tend to fall into the liquid at the bottom. But really, it’s just easier to spend the $5 on the rack. 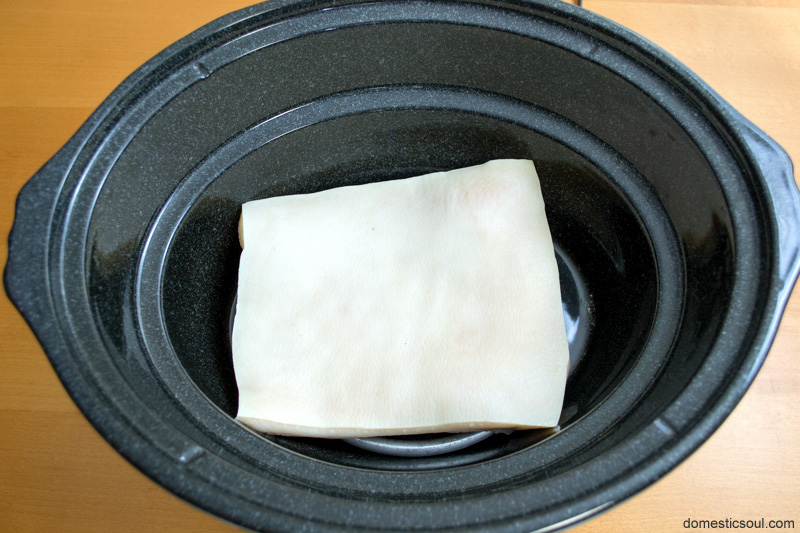 If you have only one piece, just place on top of rack. If you have leaf lard that comes in multiple thin pieces, layer your fat on your roasting rack. Try to keep the layers thin and even, as the thicker they are, the longer it takes to render. 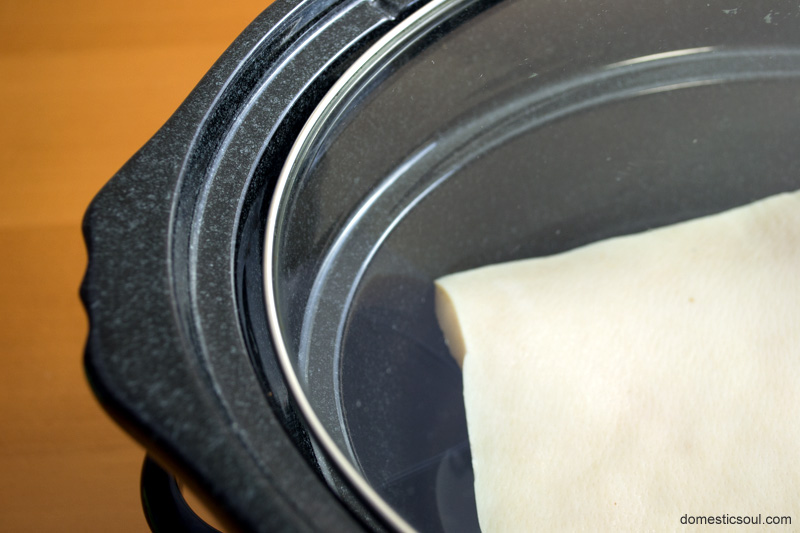 Because the crock pot is so shiny, this is a little hard to see. You want to put your lid on the crock pot askew so there is a very small amount of airflow. If you leave the lid on fully sealed, it will keep all the liquid in the crock pot. Liquid in rendered lard is a bad idea. You need the condensation and such to evaporate and leave you with just the oil. Keeping the lid askew will do just this, plus it will also let some of the heat escape so the lard doesn’t get too hot. 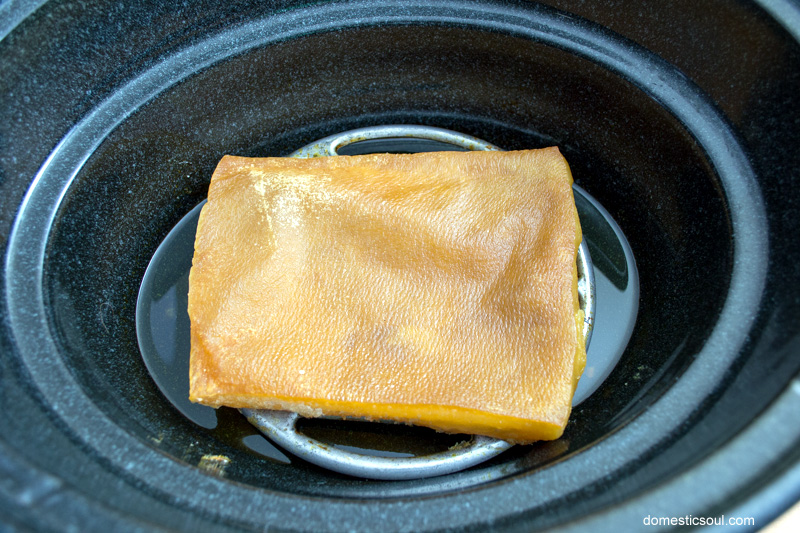 Here’s the thing. I can’t tell you how long to cook your lard. It depends on how much lard you have, how hot your crock pot gets. Ah, variables. The idea is you want all the liquid fat to come out of your solid fat pieces, leave a liquid pool at the bottom of the crock pot, and your previously solid lard pieces look crispy. It will likely take a few hours. Just keep an occasional eye on it and you should be fine. It’s not going to go from raw to crispy in half a minute. But also, don’t leave it unattended. This is not something I’d leave cooking while I was at work. This is best for a day you are going to be at home and can check on it every half hour or so.

Once your lard is done, turn off the crock pot and let it cool for a bit. You don’t want the liquid to turn solid, but you do want it cooled off enough that it isn’t going to shatter whatever jar you pour it in to.

Step 7: Pour Into Jar of Choice 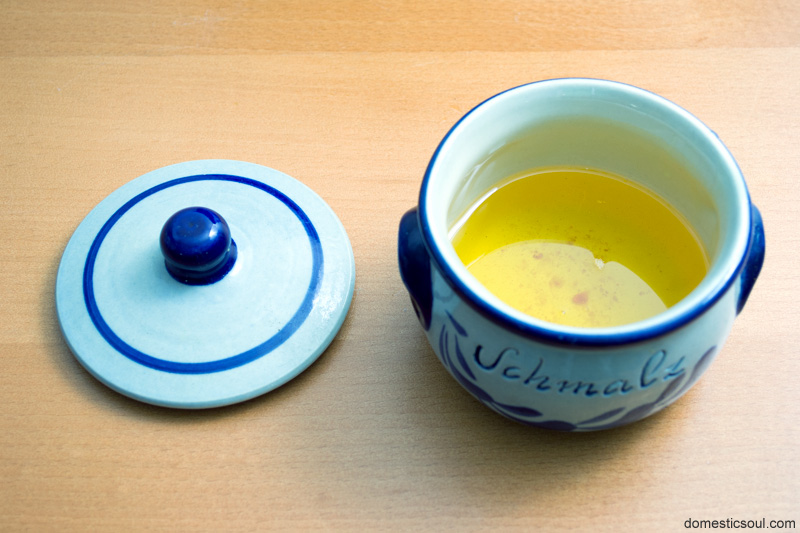 I’ve been keeping my lard in this adorable little schmalz jar. (Schmalz is German for “lard”.)If you want your own, you can find it here. Or, you can always recycle an old glass jar.

Step 8: Refrigerate Until Use 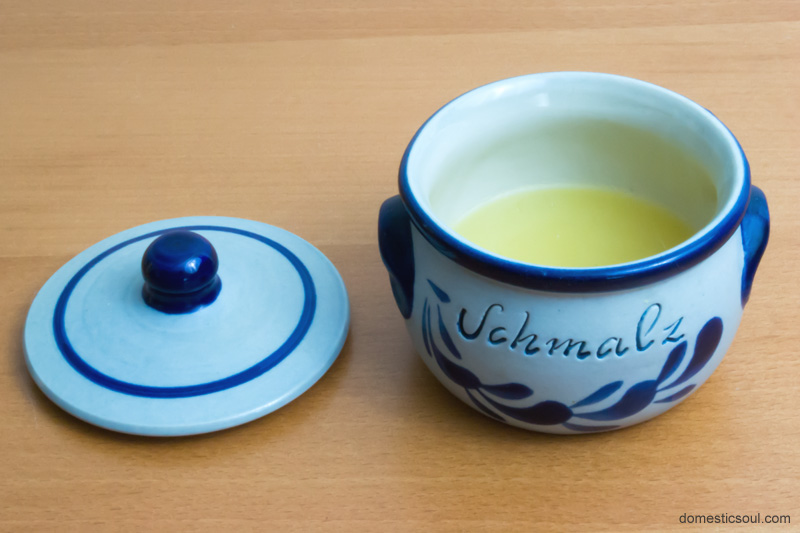 Stick your jar in the fridge until you need it. Then, whenever you want an extra tasty dish, just scoop a little out and melt it in your pot to start your meal. Voila! 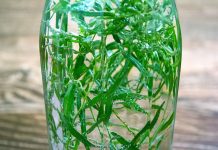 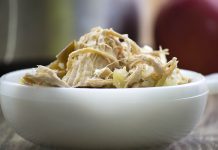 Crockpot Pork and Sauerkraut with Apples 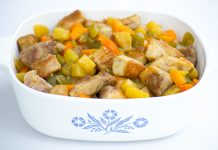 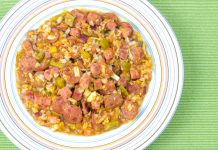