Home Cooking How To Make Bone Broth in a Stock Pot

Bone broth: delicious, infinitely useful and arguably one of the most nutritious foods on the planet. So nutritious, in fact, that it’s been traditionally used to heal the sick – everything from colds to gastrointestinal problems.

How To Make Bone Broth in a Stock Pot 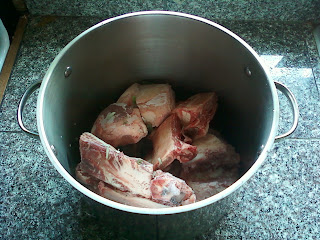 The easiest way to find bones is, of course, to stop buying boneless cuts of meat. Once you cut the edible meat off the bones, you’re left with a perfectly useable bone for broth. I tend to keep a bag full of bones in my freezer until I have enough for broth. You can also find them from your local butcher, food co-op, grocery store, or from your favorite local farmer at the farmer’s market. Someone at my local market sells huge bags of goat bones for practically pennies.

In this scenario I have a 16qt stock pot filled about half way with red meat bones. You have some options here. You can make a one-meat-specific broth (lamb broth, beef broth, chicken broth, etc), or like I did, just throw whatever you have into the pot and make a red meat broth. In this pot I have combined beef bones, pork bones and lamb bones. I always cook chicken bones separately from red meat bones, as the chicken bones are finer and therefore take less time to cook. Another option you have is whether you want to make a brown broth or a white broth. The difference here is brown broth is made from bones you have roasted first (say, left over from a grilled steak) and white broth is made from raw bones. Me? I make a “tan” broth and just throw whatever I have into the pot, raw or not. I’m all about the simple.

Special note about chicken broth: If you are planning to make chicken broth, it’s easy to do using the leftover carcass from a roast chicken. That said, try to find chicken feet from your local chicken farmer (I get mine at the farmer’s market) and add them to the pot as well. Chicken feet are loaded with glucosamine and chondroitin, therefore making them a nutritious additive for anyone with joint problems or gastrointestinal problems, as glucosamine is known to help heal the intestinal lining. 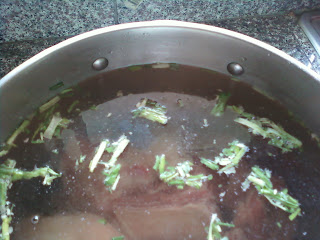 I tend the keep the vegetables and seasonings in my stock pretty simple. If I’m going to be adding it to homemade dog food, I will just use bones. If I am not adding it to homemade dog food, I’ll add a quartered onion or green onions, crushed garlic, celery sticks with leaves attached, salt and pepper. In the above picture, I used salt, pepper, green onion and some frozen pearled onions left over from a stew recipe I was trying out. For chicken broth, I might add a little thyme as well. After you have added your vegetables, add a tablespoon or two of white vinegar. This will help leech the minerals out of the bones. I know there has been some controversy over whether or not white vinegar is suitable for those on a gluten free diet, so if you are gluten free, you should be safe with Heinz White Vinegar. From their website:

However, Heinz Malt Vinegar, Salad Vinegar and Tarragon Vinegars are NOT gluten free because they all contain barley.

Now that you have your vegetables and vinegar added, fill the pot with water. As you can see in the photo above, my stock pot has rivets on the inside where the handles are attached. I use this as the “fill line” for my pot. It comes in handy while the broth is cooking because it lets me know exactly how much water has evaporated and how much I need to add back in.

Step 3: Cook the heck out of your bones

Once everything is added to the pot, turn stove on to high until your broth begins boiling. Once it starts boiling, turn down to medium and use a small hand strainer to skim off any foam that has formed on the top. Cover your stock, leaving the lid askew to vent, and let cook for somewhere between 8 and 12 hours. Check your stock periodically during cooking to see if any new foam has formed and skim it off.

During the cooking time, some water will evaporate. You’ll want to periodically check on the stock and add back any water that has boiled off. When it gets toward the end of the cook time, you can decide to add back less water, depending on whether you want less quantity/more concentrated stock or more quantity/less concentrated stock. I tend to judge this based on how many glass jars I have available to store it. It really doesn’t make much of a difference taste-wise.

Step 4: You’ll know the broth is done when…

There are two steps to knowing when your broth is done. The first is that your broth will no longer be see through. It will instead be cloudy, almost milky.

The second is, you should be able to take a bone out of the pot and go from this: 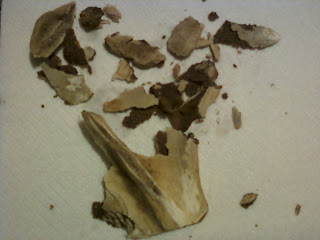 just by squeezing the bone lightly with your fingers.

Once you know the broth is done, take it off the burner, uncover and let cool. This will probably take a long time, but you can speed it up a bit if you leave it on the (turned off) stove with the stove hood fan directly over it on high. 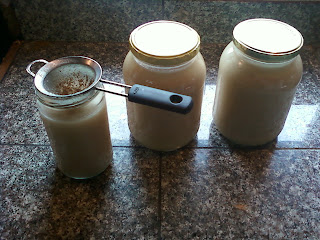 I have a stash of glass jars in my house that are left over from things like pickles and sauerkraut, which are both excellent sizes for bone broth. Once the broth has cooled to room temperature, remove the large bones, then use your 3″ strainer over the top of the jar and pour the broth in. This pot of broth filled three large sauerkraut jars plus one coconut oil jar. Once filled, keep them in the refrigerator until you need it.

Once the broth has chilled, it will most likely turn gelatinous. It’s supposed to do that. Once it’s reheated, it will turn liquid again.

Step 6: Use the broth

Now that you have all this broth, what can you do with it? I use it in everything from my Pork and Greens recipe, to meatballs, to eggplant goulash, to taco meat. The uses are endless. Basically, anywhere that you can use water, you can use bone broth. Cook vegetables in it. Heck, you can even drink it straight! It’s a nice warm drink on a cold day!